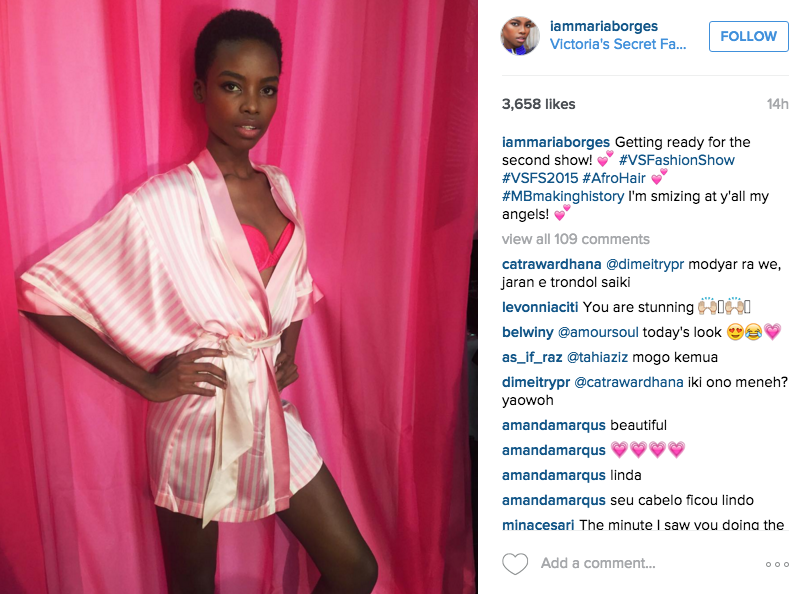 Maria Borges , a Victoria’s Secret model, decided to rock her natural hair on Victoria’s Secret Fashion show last night. A friend just texted me a link of this story “This Model Just Brought Natural Hair to the Victoria’s Secret Runway for the First Time” which was featured on Yahoo News and I am excited! Finally, natural sisters are getting bold and going for it. This is especially nice to see in a field that is dominated by a certain image: blond hair, blue eyed, rail thin, and straight hair. Many young women look up to fashion models as the ideal beauty image and go to unhealthy lengths to look like these women. It’s wonderful to see this model take this leap. This is a positive step in the right direction for all naturals. She is a beautiful woman that natural hair women everywhere can identify with!

Maria Borges refers to herself as making history and I agree! According to yahoo news, she said to entertainment news reporter B. Scott

“‘I told my agent I wanted to walk in the Victoria’s Secret show with my natural hair,'” and “‘I was nervous, but I had to do it. When they said ‘yes’ I didn’t expect it, but I was so happy!'”

In the past, Victoria’s Secret has been accused of being racist (see RACE AT VICTORIA’S SECRET: A Brief History) . And even for this show, the ratio of black models compared to white is still disproportionate. According to yahoo news, for this years showcase, there were only 8 black models compared to 40. This comes as no surprise though as Victoria’s Secret along with other casting agents and designers seem to set a “cap” at the number of black models they will employ. Often times, it’s one. Nonetheless, this fashion giant allowing Borges to wear her natural tresses is a positive step in the right direction for them. Hopefully they will continue with this trend.

What do You Think? Cancel reply

This site uses Akismet to reduce spam. Learn how your comment data is processed.

Press to Check out Our Channel!